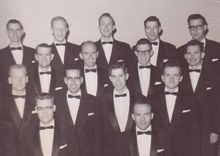 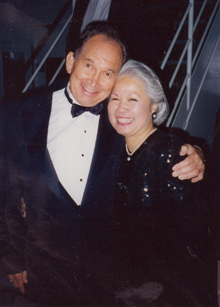 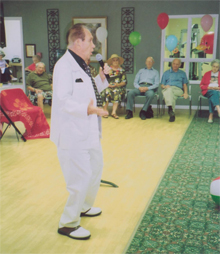 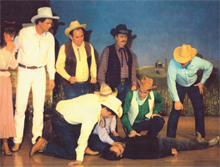 With a Song in My Heart

The Lord tells us in the D & C not to bury our talents but to use them and improve them. Since I love to sing, that commandment will be easy for me. These are some of my performances:

September 1946 – Radio Broadcast on KLO in Ogden. “Psychology and Scrunchies”

1957 - Delta Phi Male Chorus (BYU) on tour
While attending BYU in 1950, Merlin was a regular singer with the Delta Phi Male Chorus. He was Secretary to the Y Chapter of Delta Phi Fraternity. They had weekly practices preparing a tour which started June 1, 1957 and went from Ft. Collins, Colorado to Wichita, Kansas, St. Francis, Missouri, Cincinnati, Ohio, Detroit Michigan, Pittsburg, Pennsylvania, Schenectady, New York, Springfield, Massachusetts, New York City, New York, Washington D.C. and Columbus, Ohio. They would perform in LDS Stake buildings, spend the night with members of the LDS church and leave the next morning to sing in another LDS building. They were very well received. Phyllis was one of their accompanists.

November 12, 1957 – Prison News:
“The development of the choir and the quartet is due entirely to the fine talents and untiring efforts of two outstanding men, Mr. Leo Dean, of Midvale Junior High School and Mr. Merlin R. Sorensen, of Bingham High School. These men have been putting everything they have into their work here. They have been putting aside some of their own personal business and most of their recreational time to help us out.”

“Every evening for the past six weeks these two great guys have been driving out here after putting a full day at their regular jobs. They put on a suit of our “blues” and go to work. Yes, that is right, you can’t tell them from inmates by their clothes and certainly not from the way they act. They certainly deserve more credit that we can give to them. The very least that we can do is to show our appreciation by giving them our whole-hearted co-operation.”

June 29, 1965 – Merlin appeared in “Bye Bye Birdie” at the Music Circus. He was the mayor. He had sprained his ankle and for curtain calls, had to run down the sloping walk to take his bow.

August 28, 1990 - Merlin was accepted as a member of the Sacramento Symphony Chorus
(Both mom and dad had participated in this chorus many years previous.)

May 10, 1995 - Carnegie Hall Tour
We all flew to New York. We had rehearsals on Thursday, May 11, Friday, May 12 and dress rehearsal on Saturday, May 13. Our performance was at 6:34 p.m. It was really special for me to be in that beautiful building, all in black and white. This trip to Carnegie Hall to sing Verdi’s Requiem was the highlight of my life. It was truly a great thrill! After the performance, we went by bus to a ship which toured around the statue of Liberty in the ocean. While aboard this ship we had chicken dinner and dancing. I got to dance with Perla Warren and had my picture taken.

I regretfully write that she later died of cancer. We left New York on Sunday, May 14, 1995. This wonderful trip was not all free. My cost was $1194.00 It was well worth the price! (pictures) (side note: Dad had just had a six bypass cardiac surgery on April 19, so was just barely able to go.)

February 15, 2002 - Dad won a $50 United States Savings Bond for singing in a talent show in Eminence, Missouri on his mission with Della.

April 21st 2002 - Sung on his mission with Della in Missouri at Ozark Orchard Restaurant in Eminence, Missouri

May 23, 2004 – Spring Recital of Merlin’s piano students in Sacramento