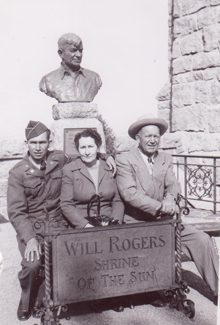 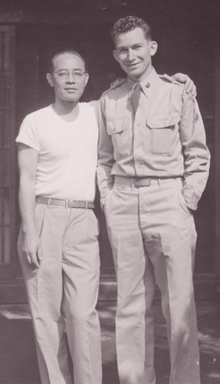 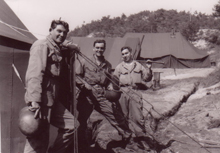 My life at Grand Canyon was so pleasant! It was with a group from BYU for the summer. Most of us worked in the kitchen. When guests arrived at the Grand Canyon, we would go and sing to them. After school was out, it was great to have a job where you could sing and perform! I was on cloud nine! The group was compatible and I was getting to know them all quite well, and then it happened. My greetings from the draft board came! My mother wanted me to come home before I left for the pre-induction physical. Reluctantly, I packed my suitcases and said farewell to by BYU friends.

My few days at home were filled with fun but also anxiety. I soon found myself at Fort Douglas in Salt Lake City at a physical examination station. The examination was highlighted with a young man who was told to bend over and spread his cheeks. He bent over and spread his facial cheeks for the doctor. They were testing the men for diseases. It was a very humorous sight to see this guy get his cheeks mixed up.

I was soon on a train headed for Fort Riley, Kansas. The basics were helpful for me to get organized and indoctrinated in keeping things neat and tidy. This training has been very beneficial my whole life. Physical training was necessary and also very helpful. Marksmanship soon was over and we all passed the test and were awarded our ribbons in marksmanship. Chow was almost as good as mother’s since it gave us the strength to complete our basic training.

We were soon given our assignments and were on the train going through the Rocky Mountains. The elevation in Kansas was so low that I had a head ache most of the time. I was eager and happy to be heading west to Colorado. At Camp Carson I was assigned to be behind a typewriter most of my enlistment. Military reports and correspondence along with the technical records were soon understood and morning reports became my main daily duties. Soon there was a call for overseas duty, and since my MOS was 3290 which was for clerical duties, I was assigned to go overseas. Processing soon began and I was given a DELAY ENROUTE to Fort Lawton, Washington prior to going to Japan and Korea.

After the examinations to Camp Fort Riley in Kansas. Because of the low altitude, I had a headache all the time I was in Kansas. As we climbed in altitude to Colorado, my headache soon left and I was glad to be in the West again.

While serving in the Armed Forces, I served as the Discussion Leader and led discussions from military prepared materials on various subjects. Also, during this time I was responsible for the preparation of new articles concerning the military personnel. This was later sent to the home town of the servicemen.

Since I could type most of my military career, it consisted of typing various military documents and the well-known morning report. I later received a commendation medal for excellent service.

I earned the rank of Staff Sergeant and didn’t see any fierce actions. I didn’t shoot anyone or throw any hand grenades. I feel very blessed. I did play a portable organ for the Chaplain. While playing at a church service at the battle front an extra loud explosion was heard directly behind me. I thought my time had come and I would soon meet my maker. I was really scared to death, but we soon learned that it was our 105 howitzers shooting at the North Koreans. I was very relieved as I drove my jeep back to Chunchon where I was stationed.

In leaving Korea, we were asked who wanted to be in a program when we docked at San Francisco. I responded positively. After I went on board the ship, we were soon in the Officer’s Club (Mess) where we soon were allowed to meet and practice for the Big Show in San Francisco. There were about 20 men at that rehearsal. After the trial and error we soon had a tentative program outlined. Every day after that we all met in the Officer’s Mess after our noon meal to practice for the show.

Later as I debarked the ship, I saw my parents on the pier waiting. I sneakily elbowed by way through the crowd and surprised my mother with a Big Korean KISS!