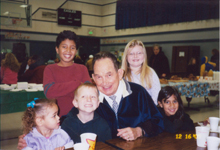 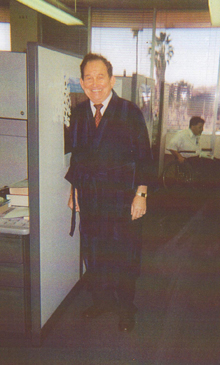 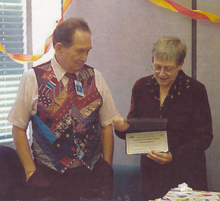 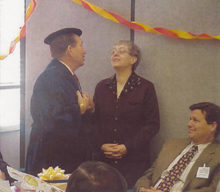 During my school teaching years, I have had many experiences presenting various programs to the PTA in our neighborhood. Beyond school hours, I have served in many leadership and church positions including Scout Master and Bishop in the LDS Church. Both of these positions gave me many opportunities to teach and train and motivate others. I also had many chances to sing as well.

My professional career started at Weber College and continued at Brigham Young University were I earned both a Bachelors and Masters Degrees.

Many of my classes at Weber College were in music. In fact, I was majoring in music and minoring in Education. I expected to teach or perform in music upon my graduation. I sang in many choruses throughout my college days. I gave a senior recital and also a graduate recital at BYU.

My first contract was teaching music at Bingham Canyon High School in Copperton, Utah. (Bingham High School was later consumed by the Bingham Copper Mine.) I followed a teacher who was very gifted on the organ: Lowell Hicks. I therefore inherited some challenges from him. I received one of his organ students, Marla Smith. She did well in spite of me. Elvis Presley was very popular when I taught at Bingham. In teaching music appreciation, the students found it difficult to listen and gain what was available when the song “You’re Nothing But a Hound Dog” permeated their memory. I had a very successful choir which sang music to “The Littlest Angel”. I had a student who danced as the Littlest Angel”. The choir sang numbers of Christmas. I had a student on the organ that would do special sound effects on the organ. His name was Jimmy Prigmore. It was very well done and very well received. I was very proud of them. To remain in Junior High School had its drawbacks mostly due to Elvis’ influence.

I finally transferred to 5th grade in Bingham Elementary School. It was great for I was on contract and was student teaching at the same time. Many enjoyable field trips and lessons on roads were taken around that dwindling, but interesting town. The most interesting person I ever met was a man I met while teaching school at Bingham Elementary. He was from India. He was a member of the church and I invited him to come to my 5th grade class. He spoke about snakes and smashing the eggs before they hatched so they would not be a menace to the children. Each spring they would have an egg crushing activity. A representative from the Education Department came to my class to observe and was very satisfied except the alphabet cards on the wall were a little askew and that was the only criticism he made. I got my Elementary Credential and continued teaching.

The salary then was inadequate to raise my growing family so we applied to teach in California. We packed our belongings and with the help of the movers, left for Crescent City. Jimmy Merrill a member of the church in Crescent City Bishopric hired me to teach seminary in Crescent City and Devall Felshaw the Stake President and also President of the school district hired me to teach fourth grade in Crescent City. I only taught there one year because there was an earthquake near Alaska that caused a tidal wave in Crescent City. That experience certainly enriched my lessons concerning tidal waves and destruction. Because of inclement weather and cultural problems, we came to Sacramento during the Easter vacation and was hired to teach 5th grade at Woodbine School in Sacramento.

I became permanent in Sacramento where my professional growth has grown the most. One of the highlights was going to a lift off of a satellite with four other teachers. We spent the weekend together going to different classes on space. Since that experience, I teach a unit on Space Exploration each year. I have collected various teaching materials on space, music and printed books from Washington DC. I feel that the interest in space has awakened their interest in science and reading. The Weekly Reader Newspaper has updates on the planets along with the Science Yearbook from World book. We’ve tried to make the studies in the classroom current with the many space trips which are always in the news. It’s amazing how much interest of space can affect a child’s academic pursuit.

My philosophy of behavioral teaching is a happy feeling. Since I have seven children of my own, I love them and like to see their progress and happiness. Classroom control is essential for progress and happiness of both children and teacher. We have a behavior modification approach which works for us t our school. If a child breaks a rule, he/she gets his/her name on the black board. Motivation is the key to good classroom control. In my room I cut out cardboard “A” out of good quality tag board. It has their name written in calligraphy. On the edge of the “AA” I tape a different colored ribbon each time the students receive 100% on any test. This motivation curbs most discipline. When a problem arises we discuss it openly and afterwards I express my hope in their improvement. I have several treat cans and when a treat is visible, most children try harder. Here are special stickers to go on their “A” for non-academic reasons. All of these behavioral modes help to make teaching controllable and enjoyable.

Each year at Valentine’s Day, I helped my 3rd grade children make a valentine mail envelope. They each had a supply of colored paper and original decorations. I always got a special Valentine “For My Teacher.” I always appreciated their efforts.

The most “gutsiest” thing I ever did was done at the Woodbine School where I taught for 3rd grade for several years. The child in questions was not tested high enough to be in the top reading group. This aggravated the parents to the extent they wanted me fired! I had prepared all the necessary papers, including test scores unknown to the parents. She had signed all the test papers I sent home and they were returned. I prayed for strength the night before the meeting with the parents, the attorney and the principal. My daughter, Shelley came into my bedroom and offered the most sincere and humble prayer I had ever heard. The next morning I was dressed to the limit and was very articulate as I explained to all present the low scores of her daughter which satisfied all present. No problems resulted and I got a congratulatory letter from the principal which he put in my file.

I have been a member of the local, state and national education associations and respond and support our building representation, even though I have never had that responsibility to serve in that area.
(Merlin’s resignation from teaching at Woodbine was effective June 18, 1988.)

I started as a part-time employee at the California Department of Motor Vehicles during the summers in July 1965 and became full time after my retirement from teaching school. I received a certificate from DMV for twelve years of service on January 5, 2000. Also received an award of from DMV for his outstanding leadership in the 1993 United Way Campaign. He received a $30 award from DMV for his suggestion of rearranging the file cabinets to increase accessibility and permit more than one employee to use the files without interfering with each other.

My community life has been centered around our seven children. Where they were, we got involved. It has included manager of the Little League Baseball team to being scout master and taking them on trips for a week in the summer for four years. I was also the Dance Director which was responsible for the band, their payment, refreshments and environment for about 200 teenagers. As an executive for the month we held leadership training for adult leaders and gave their training each month. As scoutmaster I was involved in giving training and development in scouting skills each week for the scout troop, amounting to 9-12 boys. We had an experience to gain support from the neighborhood when one of my daughters was almost raped. We went door to door inviting people to our house to discuss how to make our neighborhood safer.

I have always enjoyed helping people. Once I met a couple who had a construction error made when their home was built. When it rained the forms slipped and when it rained, inside became wet. Legal attempts were made but nothing corrected the problem. During this time while watching LDS Conference, I learned that you have to help the homeless. I sent them a check for $500. Later I received a beautiful card. Needless to say, it was a blessing.

(Editor's note: After dad retired from DMV, he would volunteer every Friday to go to the school in Elk Grove where Russell's children attended and read stories to several classrooms of children. There are links to an appreciation letter from one of the teachers as well as one from one of the students. You also see a picture with Merlin with some of the children here on the left.)